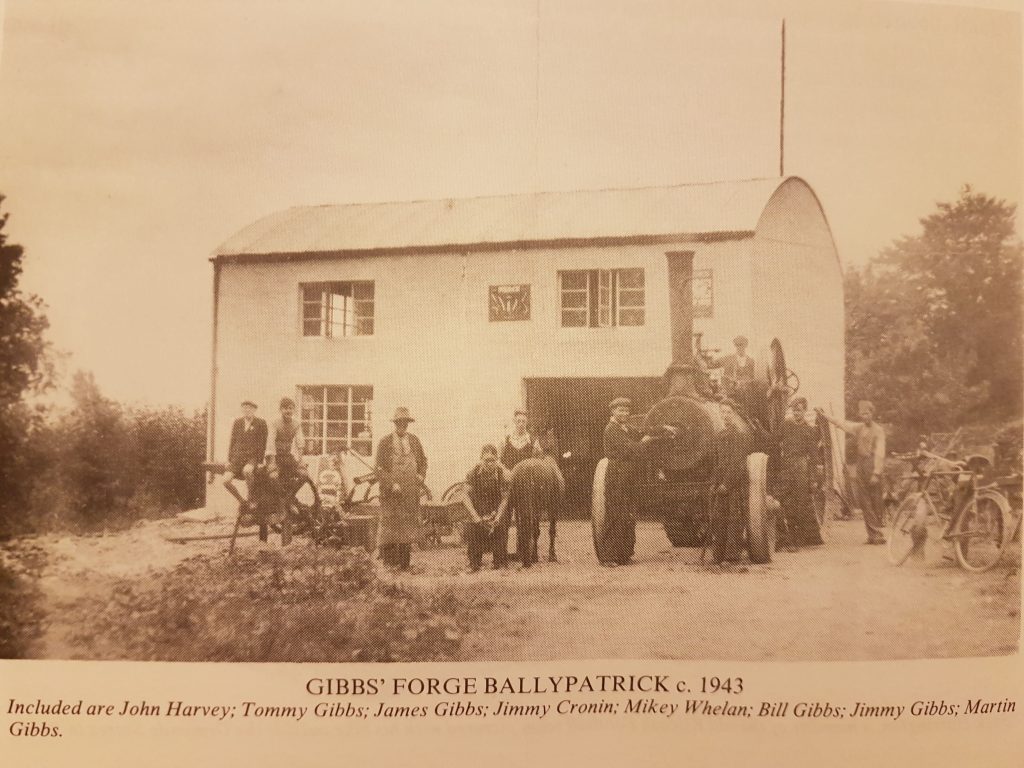 In the middle of the seventeen century Cromwell captured Kilkenny. On his way to Clonmel he climbed Slievenamon. While on this mountain he looked down on the valley and formed the idea that this was a valley worth fighting for.

Cromwell lost the battle in Clonmel and had to move onto Limerick. In his army were two young Gibbs brothers who were master blacksmiths. Recognising the beauty and opportunity in the area they decided to quit and settle in Powerstown, just outside Clonmel. This is where the first Gibbs forge was set up and from there they set up a further forge in Kilkenny.

William Gibbs was born in Kilkenny and moved on to Ballypatrick around 1880. He rented a forge in the village and after successfully growing the business, built his own forge. He married Ms O’Donovan who was the local publican. The forge thrived under William, benefitting from the prosperous local farming trade and his son James took over in the early 20th Century. James was an astute man. Under James, who was an astute businessman as well as a skilled blacksmith the forge grew allowing him to open a second forge in in Kilsheelan, employing five master blacksmiths.

In the early 1930s James was approached by the ESB for permission to erect ESB poles on his land on route to the creamery. This was a three phase line. He saw the opportunity it would give his business because at that particular time he saw the world was changing and the mechanical age was on its way. He offered the ESB the right to use his land, provided they would supply him with three phase current. This was agreed.

Then he turned his thoughts to building a workshop. The project began shortly afterwards and was completed in 1939. This was one of the most modern workshops in the country. It was fully equipped with electrical drills. He was ready to move into the mechanical age. He was a man of great vision around that time. He was offered a sizeable farm in the locality for a very small sum of money as the owner was evicted. He refused to avail of same. 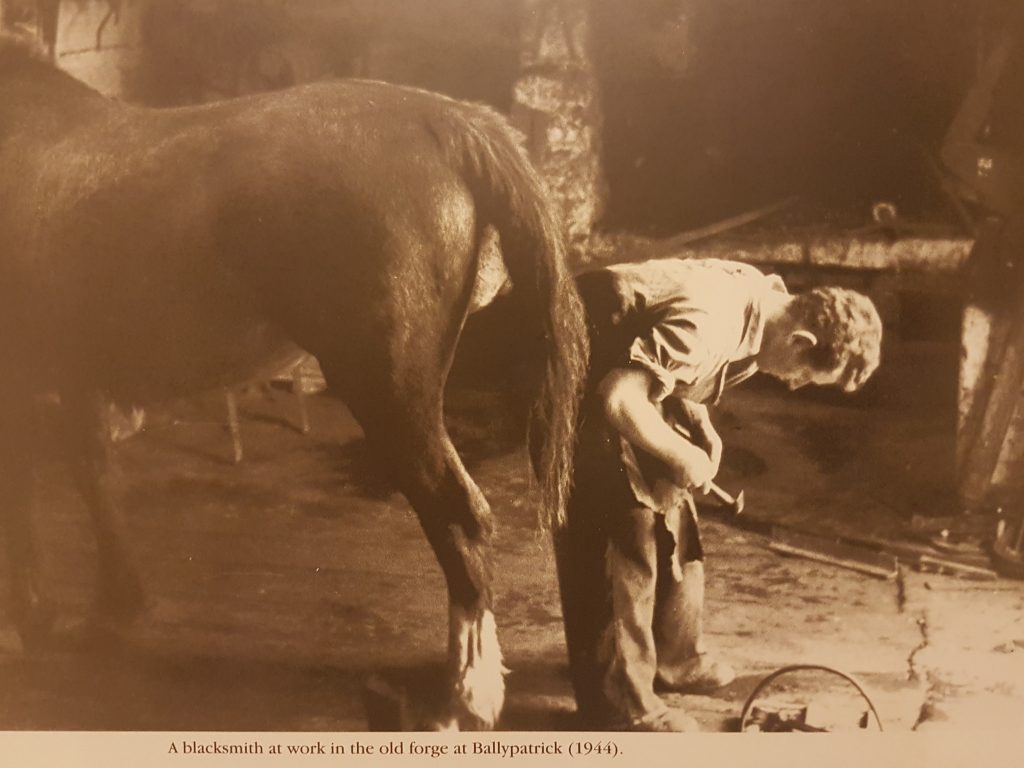 William Gibbs, leaned his skills from his father and took over the family business in 1943. During the war, the workshop was very busy as machinery parts were hard to come by and James Gibbs had built up the necessary machinery that was necessary to repair and create the tools and parts that were needed for farm machinery. His vision had proved a huge success and under William the forge went from strength to strength. Repairing steam engines became a specialty.

William continued to run the forge and workshop through the 1950s and 1960s. At this time, the shoeing of horses was declining and it ceased around the late 1950s. Transport and farm machinery had become mechanical by this stage. The business was primarily serving three counties, Kilkenny, Tipperary and Waterford but steel was leaving the workshop destined for all parts of the country.

On a particular Saturday afternoon, around 1954, three gentlemen called to the workshop to see William. They were Gilbert Hawley, Bill Tobin and John McManus. They had returned from England to Ireland to work on land reclamation as the government of the time had provided grants for the same. They were looking for people to service and repair their machinery. William duly obliged, repairing their dozers and other machinery for many years. The famous racehorse owner J.P McManus is the son of John McManus.

Also at the time, William was offered the agency of the Class Combine Harvesters and several other makes but he refused all as he was happy with his lot. He had built a business which provided support, employment and industry to a small but vibrant village. It was a little centre of innovation and excellence in County Tipperary. William like his generations before believed that success was achieved through giving not taking and accumulating. 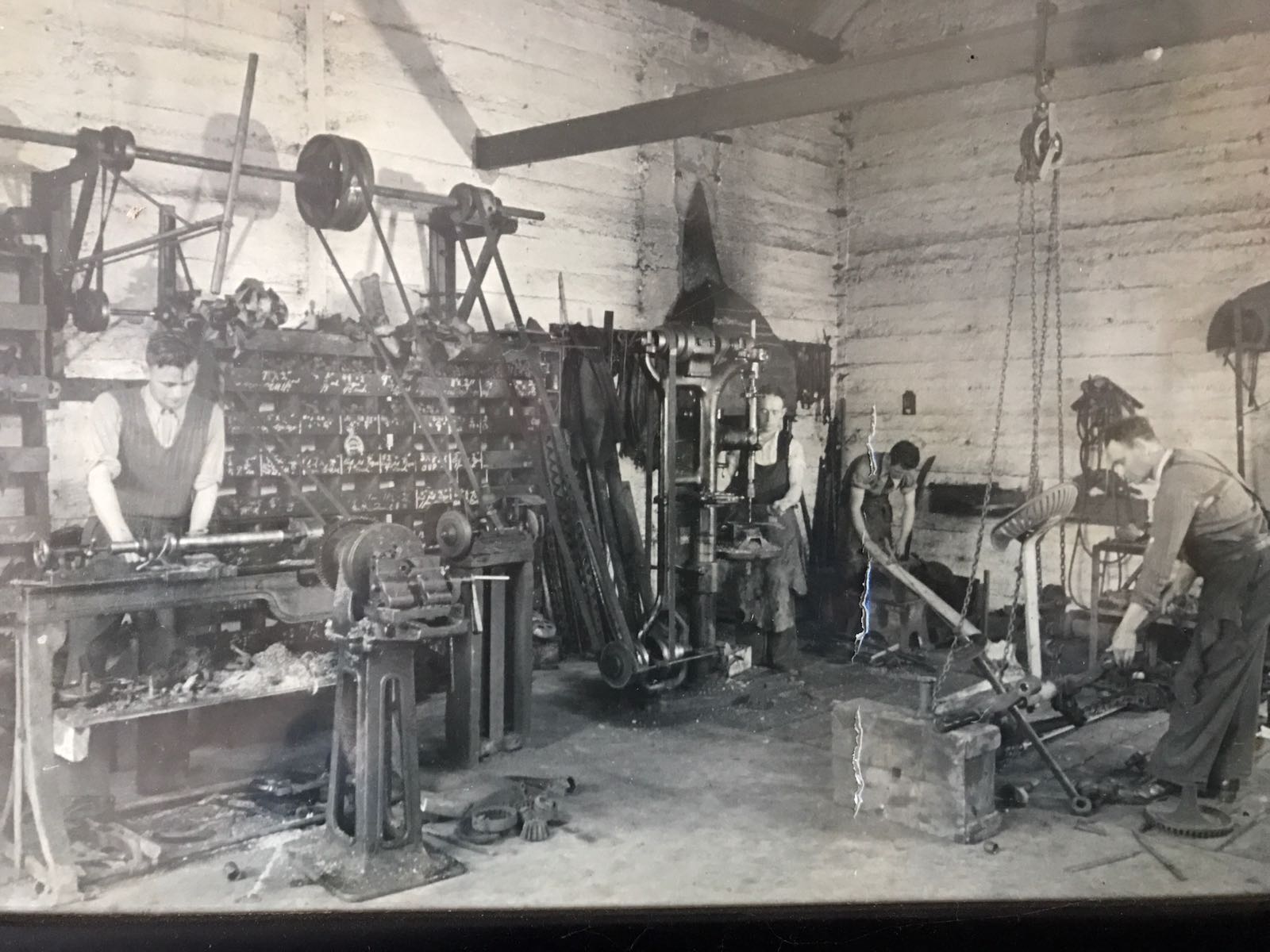 William “Bill” Gibbs went to his eternal reward in 1978 and the business passed to Michael and Edmond. The business operated in the old workshop for a number of years however it was decided that this was not big enough for modern machinery and a new forge was needed. In the middle of the 1980’s it was decided to move the business to a new site opposite the creamery.

It is probably of the oldest business in the region, with over 150 years service to the community under Gibbs Engineering.